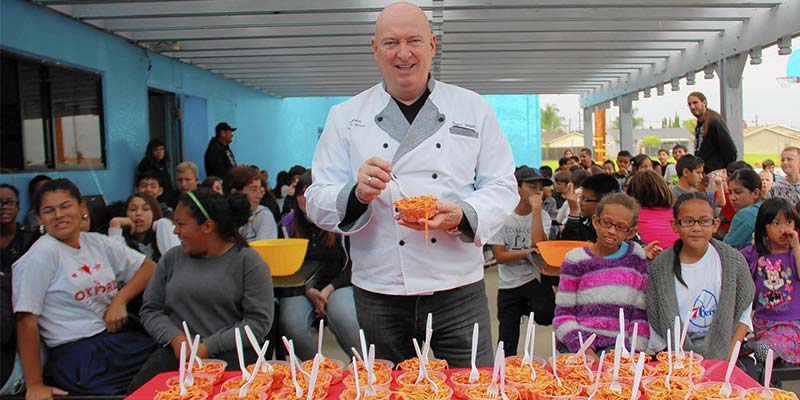 Restaurateur aims to expand his pasta dinner program to Chicago and New York.

When Caterina Serato heard that children at the Boys & Girls Club of Anaheim weren’t being served dinner, she told her son to make them pasta.

Huntington Beach resident Bruno Serato has continued to do so since the chef’s concerned mother visited the club April 18, 2005.

Friday, CNN was set to air a story on Bruno, who was awarded the CNN Hero’s Award in 2011 for his work in Orange County, and his mission to feed underprivileged children around the United States.

“I didn’t want to stop, so I’ve done that every day since then,” he said.

Serato, 57, owner and chef at the Anaheim White House Restaurant, fed 75 children that evening nine years ago and estimates that he’s filled the stomachs of more than 750,000 across the county.

With help from the Boys & Girls Club of Anaheim, Serato started the nonprofit Caterina’s Club, which aims to provide dinner for children in dire living situations, such as those living in motels.

He or his executive chef cook the pasta meals each night, and his staff delivers the food to various Boys & Girls Clubs, YMCAs or other nonprofits in Anaheim, Buena Park, Garden Grove and Stanton. He wants to expand his program throughout the country and

is talking with youth programs in Chicago and New York to try to replicate what he’s done in Southern California.

“My goal is to get every Boys & Girls Club in the country to feed kids,” he said. “It’s a piece of cake to do. I don’t perform miracles. God does miracles. I just use two hands to cook pasta.”

Michael Baker, executive director of the Boys & Girls Club of Anaheim, was with Serato at that first pasta dinner in 2005. That Serato continues to help those less fortunate didn’t come as a surprise to Baker.

“Here we have some of the poorest children in all of Orange County eating from one of the greatest restaurants in the world every single night,” Baker said. “How awesome is that?”

Serato said he funded the program himself for the first six years and even had to refinance his home and restaurant to do so.

After receiving the Hero’s Award from CNN in 2011, donations from various organizations have come in, he said.

“The program, for the last two to three years, has been funded from donations and not out of my pocket,” Serato said. “If that didn’t happen, I would have had to close down everything.”

Serato said he has a special place in his heart for the children he feeds. The Italian grew up poor with six siblings in France and

watched his parents, especially his mother, struggle to put food on their plates.

He credits her determination for shaping the man he has become.

“When she saw anyone starving, my mom was always the person to feed them,” Serato said. “… My mamma’s heart and DNA is in me.”