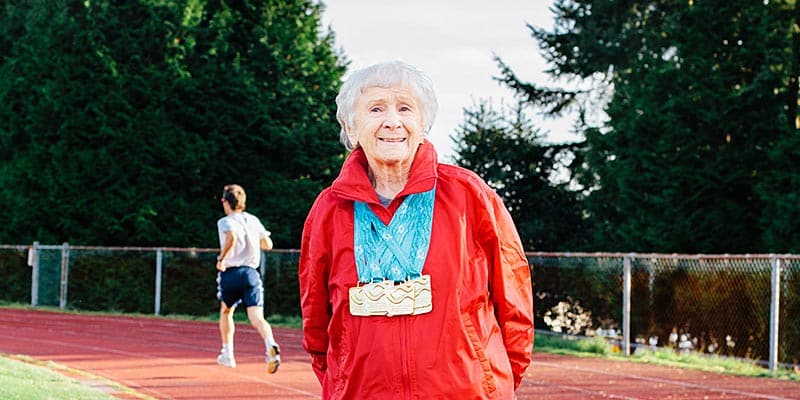 What makes Olga run? Lessons from a 94-year-old track star

While many of her peers are thinking about long-term care, Olga Kotelko is contemplating the long jump.

The 94-year-old track star is breaking records and astonishing doctors with her energy, longevity and verve for life. Her goal is to live to 120.

“I chose to be a young-at-heart athlete rather than an old woman,” Kotelko told TODAY. When she reveals her age, people often don’t believe her and sometimes demand to see her ID as proof.

Kotelko is the subject of “What Makes Olga Run?: The Mystery of the 90-Something Track Star and What She Can Teach Us About Living Longer, Happier Lives,” a new book that examines her diet, lifestyle, and personality to see what lessons she can offer about aging well.

Kotelko, who lives in Vancouver, is a farmer’s daughter, born in the central Canadian province of Saskatchewan. She later became a teacher and raised two children on her own. She was always active, but didn’t take up track and field until age 77.

“Once I started, I thought to myself, ‘Well, gee, why not?’” she recalled.

Kotelko now takes part in 11 track and field sports — the hammer throw is her favorite — and travels the world to complete in her age range. She’s collected 750 gold medals and has broken 26 world records.

Researchers are amazed by her mental and physical health, attributing her longevity to smart habits and great genes.

“She’s remarkable by every criteria that we measured. She has the capability of somebody close to 30 years her junior,” said Russell Hepple, a researcher on aging at McGill University in Montreal, who has studied Kotelko extensively.

What habits have helped Kotelko reach 94? She exercises every day and gets eight hours of rest, though she sometimes wakes up in the middle of the night to stretch and meditate. She enjoys Sudoku and other puzzles to keep her mind in shape.

“Be optimistic and face every day with a smile,” she said. “Praying, having faith and a good relationship with your family. Friends, a lot of friends.”

When it comes to diet, she loves fermented foods, like sauerkraut and pickled herrings. She avoids all processed foods and eats small meals throughout the day. Alcohol isn’t off limits: Kotelko enjoys a glass of wine on occasion and “a little bit of scotch now and then.”

Longevity experts say it’s still a little mysterious why some people get to live to extreme old age, but more of us are doing it. The total U.S. population aged 90 and over is projected to more than quadruple from 2010 to 2050, according to the National Institute on Aging.

Part of the reason is improvements in medicine and public safety, which are making it possible for people to avoid dying from causes such as infectious disease or car accidents, said Steven Albert, chair of the department of behavioral and community health sciences at the University of Pittsburgh, who studies aging.

“Only for the first time now have we eliminated so much accidental mortality over the life span that people who have their wonderful genes that allow them to live to very old ages actually get a chance to do it,” Albert said.

“It’s possible to age very well into very, very late life and I think you’re going to see more of this. We don’t have too many athletes like (Kotelko), but why not?”

Kotelko shares many of the habits commonly found among centenarians, such as her optimism and surrounding herself with friends, Albert said.

But many factors that determine longevity are out of our control. Women live longer than men, for example, and if your parents lived to extreme old age, your likelihood of doing the same is better, he noted.

“Apart from that, the lifestyle is very important,” Albert said. “The exercise, the engagement, the cognitive stimulation.”

He also stressed the importance of eating right — such as trying the Mediterranean diet, with less meat and sugar — and simple preventive measures, such as keeping blood pressure and cholesterol under control.